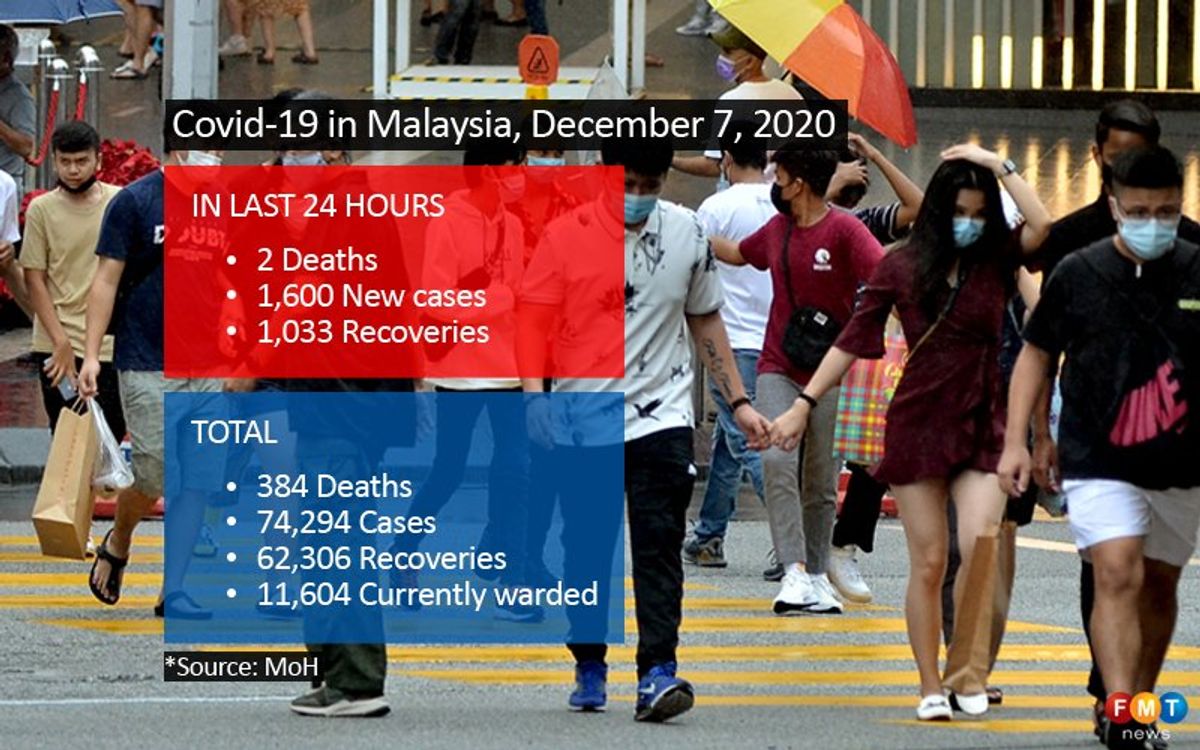 PETALING JAYA: The health ministry recorded 1,600 Covid-19 cases and two deaths in the past 24 hours.

Health director-general Dr Noor Hisham Abdullah said there were 1,033 recoveries, bringing the total number of those discharged to 62,306.

In a statement, Noor Hisham said the 1,600 cases bring the total number of infections in the country to 74,294.

Meanwhile, the two deaths bring the toll to 384.

There are 11,604 active cases with 129 of them receiving intensive care, of which 57 require respiratory assistance.

Negeri Sembilan recorded the most number of cases today with 541, of which 521 were from existing clusters. A total of 500 cases are linked to the Bakti prison cluster. Negeri Sembilan’s cases made up 33.8% of today’s overall total.

Selangor had the second most number of cases today with 426, of which 99 cases were from close contact screenings and 49 cases were cluster-based. The vast majority of cases (276) were from other screenings. Selangor’s cases made up 26.6% of today’s overall total.

Sabah recorded the third biggest number of cases with 248. A total of 124 were from close contact screenings and 61 cases were linked to clusters. Sabah’s cases made up 15.5% of today’s overall total.

Kuala Lumpur had 148 cases, with 70 linked to clusters, including 33 from today’s newly-detected Bina Awan Lembah construction site cluster. Sixty cases were from other screenings while 18 were from close contact screenings.

Of today’s cases, 584 came from prison and temporary detention centre clusters, the bulk of which were from the Bakti prison cluster in Negeri Sembilan.

On the two deaths, Noor Hisham said they were both Malaysians from Sabah, aged 59 and 76. Both had a history of chronic illnesses.

Out of the 1,600 cases today, only three were imported cases.