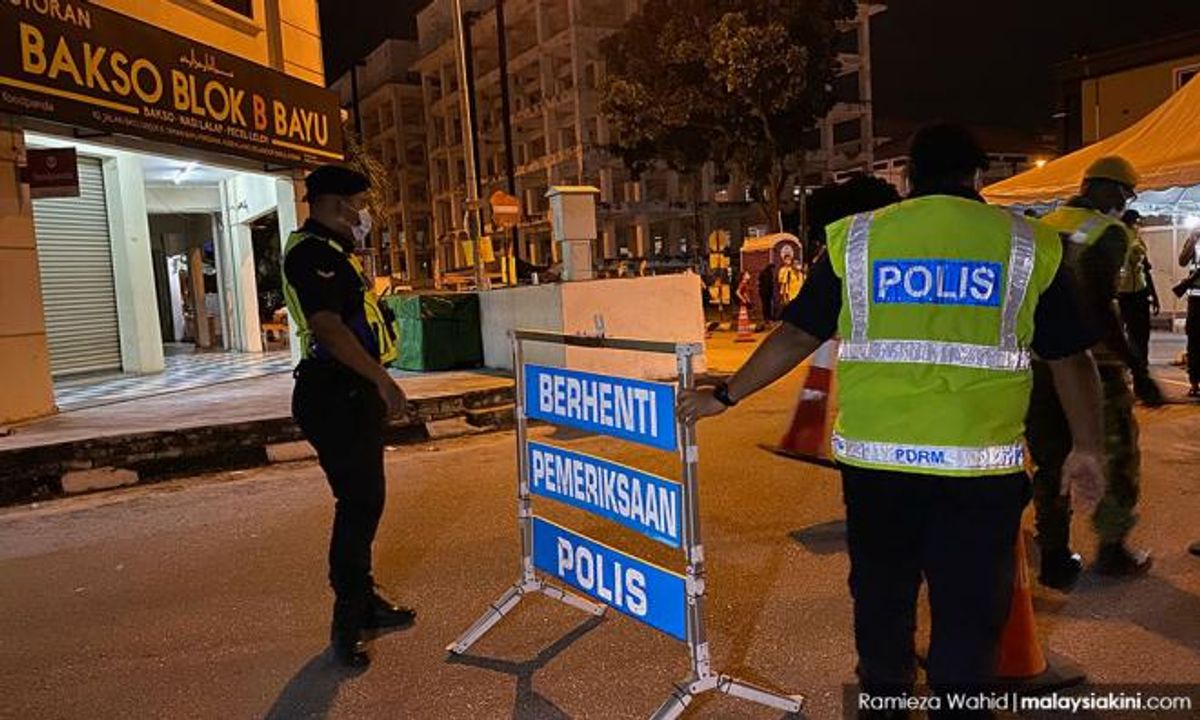 The conditional MCO in Selangor, Kuala Lumpur, Putrajaya, and Sabah will also be extended for 28 days once it expires on Nov 9.

This guide was first compiled based on Defence Minister Ismail Sabri Yaakob's statements and also questions posed directly to his ministry on Oct 12.

It has been further updated based on guidelines issued by the National Security Council.

This particular SOP is intended for Peninsular states affected to help explain what you can and cannot do under the conditional MCO.

Can I leave my home?

Two persons in each household are allowed to travel.

This is only for work, emergency and essential matters such as to purchase necessities like food and groceries.

High-risk individuals and children are not encouraged to go to public places.

How far can I travel?

Cross-district travel is not allowed. Police will be setting up roadblocks to control movement.

In Selangor, for example, there are nine districts - namely Gombak, Hulu Langat, Hulu Selangor, Klang, Kuala Langat, Kuala Selangor, Petaling, Sabah Bernam and Sepang. You should remain in your district.

However, Kuala Lumpur and Putrajaya are counted as a single district respectively.

That means anyone within Kuala Lumpur can travel to anywhere in the particular federal territory and would not be considered as having crossed a district.

The same applies to people within Putrajaya travelling to areas within the same federal territory.

For emergencies such as deaths, permission can be sought from the police ftheor cross-district travel.

Do I need to go to work? [UPDATED]

Most businesses will still be operating as usual. Only a few sectors will be closed, such as educational institutions and entertainment centres.

For industries under the purview of the International Trade and Industry Ministry, and government offices, those in supervisory and managerial roles must work from home. Exceptions are made for 10 percent of staff to be in the office for four hours, three days a week.

Fisheries, plantations, agriculture, animal farms and all industries related to the food supply chain will also continue to operate. How do I get to work if my office is in another district?

An exception is made for people who need to travel cross-district for work.

This is on the condition that they can show their work pass or letter of permission from their employer at roadblocks.

Workers whose employer pass lacks details are encouraged to get a letter to avoid complications.

However, employers are encouraged to let employees work from home.

What if my job involves driving such as logistics? [Updated]

All vehicles involving industries, businesses, factories are allowed to operate as usual including to cross districts and states.

Airports and ports will also continue to operate.

Can I hold a work meeting? [Updated]

It is not encouraged. Virtual-meeting is advised.

What if I am travelling across states or territories for work like Shah Alam to Putrajaya or Seremban to Shah Alam? [Updated]

This is also considered as cross-district travel and the same rules as above applies.

Travellers are advised to get approval from the police to avoid complications at roadblocks.

The government says an online registration method will be announced.

What if I'm in a non-conditional MCO state but need to travel to an airport in Selangor? [Updated]

Travellers are also advised to get permission from police to avoid complications at roadblocks.

Can I use e-hailing or taxi? [Updated]

Yes, but only two passengers are allowed at any one time.

This service can only operate between 6am to 12am.

Can I take MRT/LRT? [Updated]

Train services will operate as per normal.

Can I send my children to school or a childcare centre?

No. All schools, colleges, universities, training institutes and childcare centres will be closed. I study at a boarding school. What happens while the school is closed?

The Education Ministry said you may choose to remain at your hostel or wait for your parents to fetch you. In the meantime, the hostel warden will be responsible for your care while the school will provide you with meals.

If your parents want to fetch you while the cosnditional MCO is in effect, they will need to notify school authorities and get them to issue a letter.

This letter will facilitate inter-district travel for you and your parents.

I study at a private school and I am sitting for my International General Certificate of Secondary Education (IGCSE) examination, what do I do?

Get in touch with your school.

The closure affects both public and private schools, but the Education Ministry said those taking international examinations during the conditional MCO can obtain a letter from their respective schools to be allowed to attend the examination.

Can I eat at restaurants? [Updated]

Dine-in is allowed but patrons are encouraged to take-away, drive-through or order through delivery instead.

If patrons want to dine-in, only two to four persons per table are allowed, depending on table size.

If I want to order food delivery, when can I do so? [Updated]

Food delivery services are allowed to operate from 6am to midnight.

Is there a time restriction for me to travel and businesses to operate? [Updated]

Businesses are allowed to operate between 6am to 10pm.

Morning market: 6am to 2pm

Wholesale market: 4am to 2pm

Can I participate in sports? [Updated]

Individuals may participate in sports that do not involve physical contact.

They include brisk walking, jogging, cycling, individual aerobic exercise and similar exercise in an open space. It must not involve more than 10 people. 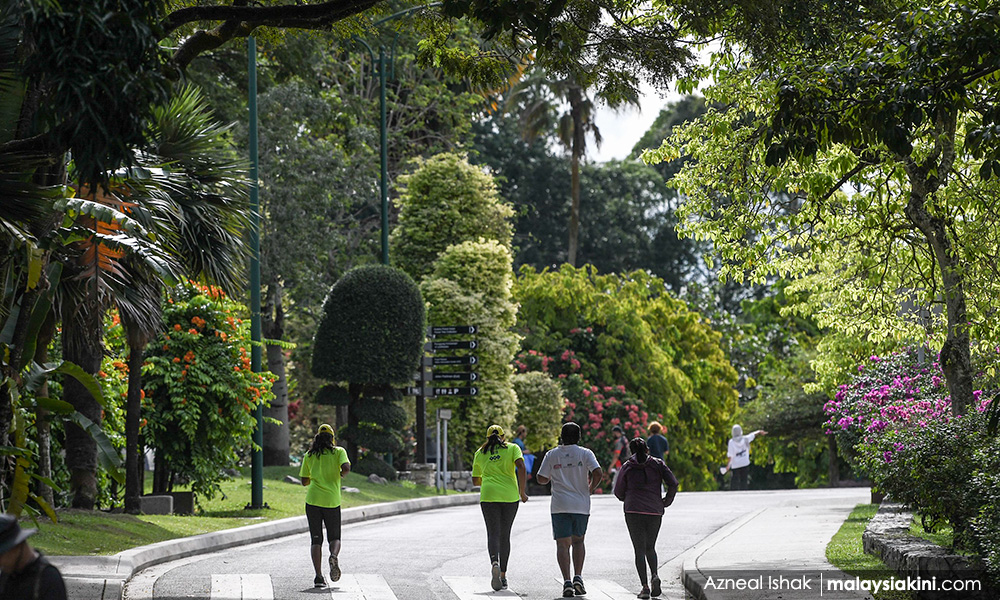 Swimming, physical-contact sports and tournaments are not allowed.

Sports within an enclosed space is not allowed. Sporting facilities including swimming pools, gymnasiums, badminton halls and football fields must close during the conditional MCO period.

As for ongoing sporting events organised by sports council, they may proceed using a "quarantine-based approach".

Can I sing karaoke at an outlet?

No, entertainment outlets are not allowed to open. This also includes theme parks, indoor playgrounds, cinemas.

I have a wedding to attend, can I?

No, wedding ceremonies are not allowed.

Can I pray at a place of worship? [UPDATED]

For Muslims, all activities at mosques, including Friday prayers, are put on hold - with the exception of congregational prayers of up to six people maximum.

For Non-Muslim places of worship, only those in green zones and with permission from the National Security Council and Health Ministry can open to the public under strict guidelines.

Can I go on a trip to states under conditional MCO? [Updated]

Tourism is not allowed in these states during the conditional MCO period.

What if I break the conditional MCO rules?

Violating the Prevention and Control of Infectious Diseases Regulations 2020 can land you an RM1,000 fine, or up to six months imprisonment, or both.

Worse, if you obstruct a public official who is enforcing the conditional MCO, you can face up to two years in prison or a fine of up to RM10,000 or both under Section 186 of the Penal Code.

Public officers aren't only limited to the police and include public servants of various agencies, including local council officers.

What is a conditional MCO?

These measures are similar to the ones imposed on the country from May 4 to June 9.

For context, the country first went into a partial lockdown - simply called "MCO" - on March 18, where most businesses were closed and only one person in each household was allowed to leave the house for food and groceries.

As the Covid-19 situation improved, the country moved into a conditional MCO, where economic activities resumed with strict conditions but leisure activities were still banned.

Most restrictions were lifted when the country started moving into the recovery MCO from June 10 onwards and this phase was supposed to last until the end of the year.

Why are we going back to a conditional MCO now?

Simply put, we are now in a significantly worse state than we were during the second Covid-19 wave which was triggered by a religious gathering in March.

This third wave started in September when undocumented migrants spread the virus at Tawau Prison and it later escaped into the community.

The spread of the virus was accelerated by the Sabah election which concluded on Sept 26. Campaigners and tourists visiting Sabah brought back the virus to their respective states.

For the context of the severity, the peak during the second wave was 277 new cases on June 4 with most comprising foreigners confined in detention centres.

In this third wave, the highest case count was on Oct 6 with 691 new cases, most of whom were Malaysians and many were spread out in the community. Each day, the new cases are also very near record-highs.

During the second wave, the most Covid-19 patients the country had to take care of at any one time was on April 9 with 2,552 people in treatment.

In this third wave, the country is setting new record-highs on a daily basis with 5,039 Covid-19 patients under treatment today (Oct 12). If these numbers continue to rise, our hospitals will be overwhelmed and the death rate will increase dramatically.

Already, the military is setting up a field hospital in Sabah, something that is normally seen during wartime.

It should be noted that the Selangor government disagrees with a state-wide conditional MCO and is urging for some yellow and green districts, like Kuala Selangor and Sabak Bernam, to be spared.

A recent study published by the United States National Academy of Sciences found that localised restrictions do better than state-wide restrictions.